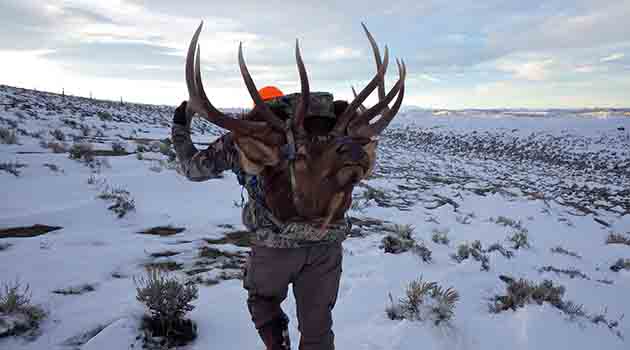 “Talk of your cold! through the parka’s fold it stabbed like a driven nail.

If our eyes we’d close, then the lashes froze till sometimes we couldn’t see;

It wasn’t much fun…” The Cremation of Sam McGee – Robert W. Service

Snow, ice, sub-freezing temperatures, bleak landscapes seemingly void of life… what’s not to love about late-season big game hunts. Now before all you snowbirds who fly South to chase Coues’ deer or rutting mulies in the deserts of the southwest begin to gloat please understand what I’m talking about here are the November, December and even January  hunts for deer, elk, goats and sheep  in the northern reaches of the West where venturing out to pursue big game this time of year demands a stoic determination bonded with an iron will because there are no other hunts that will test a big game hunter’s mettle more than these, where conditions can be downright life threatening. 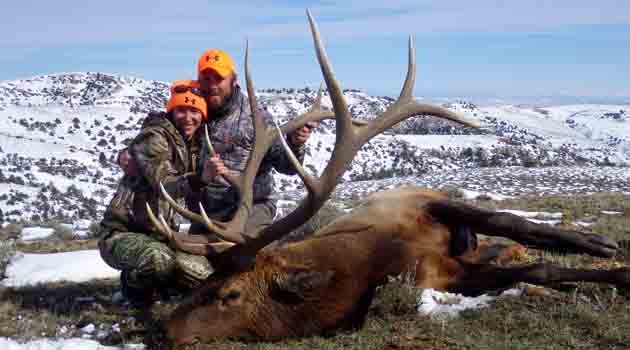 Late-season big game hunts are risky propositions. There are a wagon-load of variables stacked against the hunter; extreme cold, deep snow, migrating animals and limited tags all stack up a wall of difficulty for hunters to overcome. Some of these hunts are very limited, there just aren’t an awful lot of tags given out for them. As an example, in our neck of the mountains there are several late bull elk hunts that are meant to capitalize on the late migrating giant bulls of the Greater Yellowstone Ecosystem. These hunts are no secret but drawing one of the highly coveted and very elusive tags is difficult at best. However, drawing the tag is only the first step down the difficult path of tagging one of these late-season bulls.

The dates of these particular hunts fall during the time of year when Wyoming’s mountains experience their most hostile and unpredictable weather. Add to that the terrain of the units and you’ve got a recipe for one of the wildest and most demanding adventures of a lifetime. But with great risk can come great reward. Successful hunters with these tags routinely take some of the Cowboy State’s largest bulls each year but they earn them. Back to that wagon brimming with variables and even dangers. 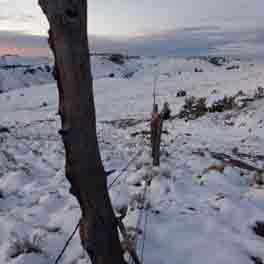 As you can see, late-season big game hunts can be and often are butal endeavors, demanding a hunter’s best skills and unwavering commitment. This begs the question… why endure all this for a buck, bull, ram or billy? There may be no better time of the year than the bitter months of winter to take your biggest animal ever.

So now that I’ve gotten your attention with the warning about how hard late-season hunts can be and I’ve shown you why they are worth the demands placed on the hunter we need to take a look at where these hunts exist. Wyoming isn’t the only place where late-season hunts for antlered and horned animals take place and while the current trend by game agencies is to phase out late hunts there are still places where those possessed of adventurous spirit, grit and determination can chase mature bucks, bulls, billies and rams late into the year and even into the new year as well. Look to Wyoming, Idaho, Montana, Colorado, Nevada and even the Dakotas if you’re in search of a frost-bitten late-season quest. Notice I don’t mention Arizona as we are talking about weather dependent hunts and frankly, Arizona doesn’t hold a candle to Montana or Wyoming for the brutality of the weather.

There are other late hunts in other states but the six or seven I’ve listed offer the best options for deer, elk, sheep and mountain goats. Look to the Eastmans’ MRS for full details on tag numbers, dates, draw odds and success rates in the coming months to make your application decision if a challenging late-season hunt is what you’re after. Remember, the best stories often come from the most challenging circumstances.

Times have changed and thank goodness so has the late-season gear I now use. The demands of late-season western hunting place a premium on durability, warmth and light weight. Your gear needs to be able to keep you alive at worst and comfortable at best and today’s hunting gear companies have those requirements dialed. Here’s a breakdown of my late season essentials sprinkled with a few favorites.

This is a glimpse into my late-season essentials, yours can and should vary depending on personal preference. However, the late-season is not a time to try and save weight or go cheap. Brutal weather and conditions will test both you and your gear to the utmost limits.

Previous Extremists Want A Hunting Buffer-Zone Around Yellowstone
Next CRAZY Bear Hunt! 3 bears in one night!