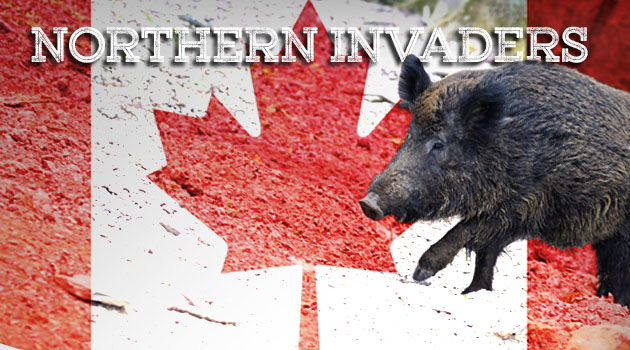 A report from along the Canada/U.S. border in North Central Montana has made us aware of a large invasion force waiting for the perfect time to strike and make their way south. For the last two years the federal government has been patrolling the border via helicopter and airplane searching for these terrorists that are bound and determined to invade the Rocky Mountain front.

Russian hybrid boars have been expanding their range in Saskatchewan and other provinces for the last 25 years. They were first brought to Saskatchewan and raised for high fenced hunting but they escaped and bred with domestic pigs to create hairy hybrids that flourish in the harsh northern regions of the world.

Studies have shown that they have been growing at a rate of 9% a year in Canada and the U.S. has feared their expansion to the south as they are considered ecological trainwrecks. FWP is trying to do all they can to keep them out of the state and the hogs carry a full eradication classification, the Senate even passed a bill to help maintain a wild boar free state. The bill carries a minimum $2000 fine if you are caught, transporting, importing, possessing or having anything to do with feral swine.

It’s been proven that hunting does little to prevent the spread of these porcine plunderers. They are crafty, are most active during the night and hide very easily. Not only do they cause enormous crop damage across the U.S. every year, they can allegedly carry up to 89 different parasites and diseases that can be transferred to other animals. Its appears it is inevitable that these wild pigs will make their way into Montana at some point, it’s just a matter of time.

So how will this affect big game hunting in Montana? No one knows yet but, hey, maybe wild bacon will keep the plethora of grizzly bears, wolves and coyotes busy and take some stress off of our big game herds. I’d be ok with that! What do you think?