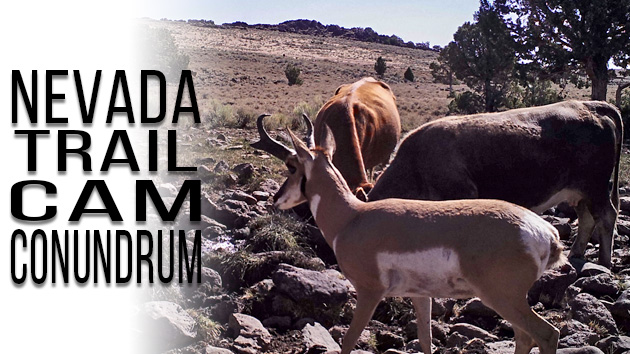 For hunters in Nevada, new regulations govern the ability to use trail cameras before and during the seasons for all big game animals.  The regulation prohibits the use of trail cameras on public land from August 1 to December 31; unless the camera is capable of transmitting the image without being checked, in which case the use of such cameras is prohibited after July 1.  In essence, the regulation has been implemented to cover the entire big game hunting season.

The regulation has been on the table for several years, and stemmed from county wildlife commissions having concerns over the number of cameras being placed by a couple of outfitters in certain parts of the state.

Nevada is a dry state, and during years with even above-average rainfall wildlife will have to get the majority of their water from natural springs and man-made guzzlers.  Hunters using cameras primarily focus on waterholes when strategically placing their cameras to monitor what is coming and going into an area and the quality of animals within certain spots.  Concerns over the impact of hunters using cameras was also a consideration in the new regulation because the coming and going of the hunters checking cameras arguably disrupted wildlife’s use of the waterholes.

Finally, concerns over the fair chase aspect of the use of trail cameras surfaced during the regulation’s consideration.  Some felt that trail cameras, and more specifically cameras that can transmit images over cellular service, gave hunters an unfair advantage over the animals during the scouting and hunting seasons.

Initial efforts to implement a complete ban failed, but with discussions and compromise the current regulation seemed to meet all the goals of everyone concerned.   But there are definite questions, problems and concerns.

The new regulation does nothing to limit the number of cameras any one hunter or outfitter can place and use.  Rather, the regulation only limits the timing during which the cameras can be used. Those original county wildlife commissions trying to level the scouting field have to look really hard and stretch the intention of the new regulation to see any of their concerns being allayed.

And while the new regulation may keep hunters from using cameras during the season to limit the impact on wildlife, there are still many other and arguably more impactful factors that affect big game movement and use of waterholes.  Domestic livestock in the areas will push antelope and deer off a waterhole far longer than someone checking a trail camera. Wild horses will do the same thing. What about pop-up blinds? Archery hunters (me being one) place pop-up blinds or build blinds out of native materials within 20-30 yards of waterholes.  How is that less intrusive than a trail camera?

Fair chase concerns are the only real issues that are addressed with the new regulation, but even then there are more technologically advanced gadgets and gear that are used to scout and hunt game that make it much easier on the hunter than the use of trail cameras.  But one has to ask the question of why there was no buffer zone considered? Such as a requirement that cameras must be placed a certain distance off the water source. And some big game seasons in Nevada begin August 1, so using cameras during the season isn’t required if you have done your scouting prior to that and fill your tag opening morning.

Like many other provisions within state’s wildlife regulatory codes, enforcement of this is going to be very difficult.  Nevada is one of the biggest states in the west and is approximately 90% public land. Waterholes and springs exist everywhere.  Practically speaking, not only is it going to be difficult to find a camera on a waterhole but it will also be hard to prove to whom it belongs.

There are also companies that now offer scouting photos of particular units in given states for a price.  Will Nevada’s wildlife enforcement agencies crack down on those companies? How will that work? There are loopholes that will undoubtedly be exploited.  Ranchers and businesses can apply for a permit that allows them to keep cameras on waterholes during the prohibited months if it is to monitor use. It isn’t too hard to see how this is going to work—someone with a tag in the area only needs to do a little research on grazing rights in a particular area to figure out how to find the right rancher to work out a deal to either obtain or purchase trail camera photos.

It is hard to find the rationale behind Nevada’s new trail camera regulations.   What began as an attempt to implement restrictions on the use of trail cameras because of overuse by a few hunters in rural Nevada has morphed into regulations that don’t meet the original concerns and will be difficult to enforce.  Will they work? Nobody knows. How do you prove that it will? The bigger concern is whether more regulations like it follow.

Jason Peak is a practicing attorney licensed in Nevada and California. He specializes in civil litigation and holds the highest distinction as a Martindale-Hubbell AV-rated attorney. After receiving a B.A. from the University of Nevada in Criminal Justice and Juris Doctor from Willamette University in Salem, Oregon, he grew his practice into one of the largest Nevada-only civil litigation firms in the state. Jason uses his legal background to help hunters maneuver the legal maze of hunting regulations and rules. He is always willing to help hunters with any questions they may have. Jason loves bowhunting and chases trophy big game from California to Wyoming with the occasional stint in Kansas hunting whitetails.
Previous Idaho Tags Gone In A Flash
Next Dark Timber Coffee Company Giveaway!