Chronic Wasting Disease (CWD) remains prevalent across much of Colorado and continues to negatively impact deer, and to a much lesser extent, elk populations. To date, CWD has been detected in 40 of 54 deer herds, 16 of 43 elk herds and 2 of 9 moose herds. Colorado Parks & Wildlife (CPW) continues to study CWD and just released some interesting info on their CPW News Release site entitled: “CPW presents results of mandatory testing for chronic wasting disease at May Commission Meeting in Sterling” (small town in NE CO). 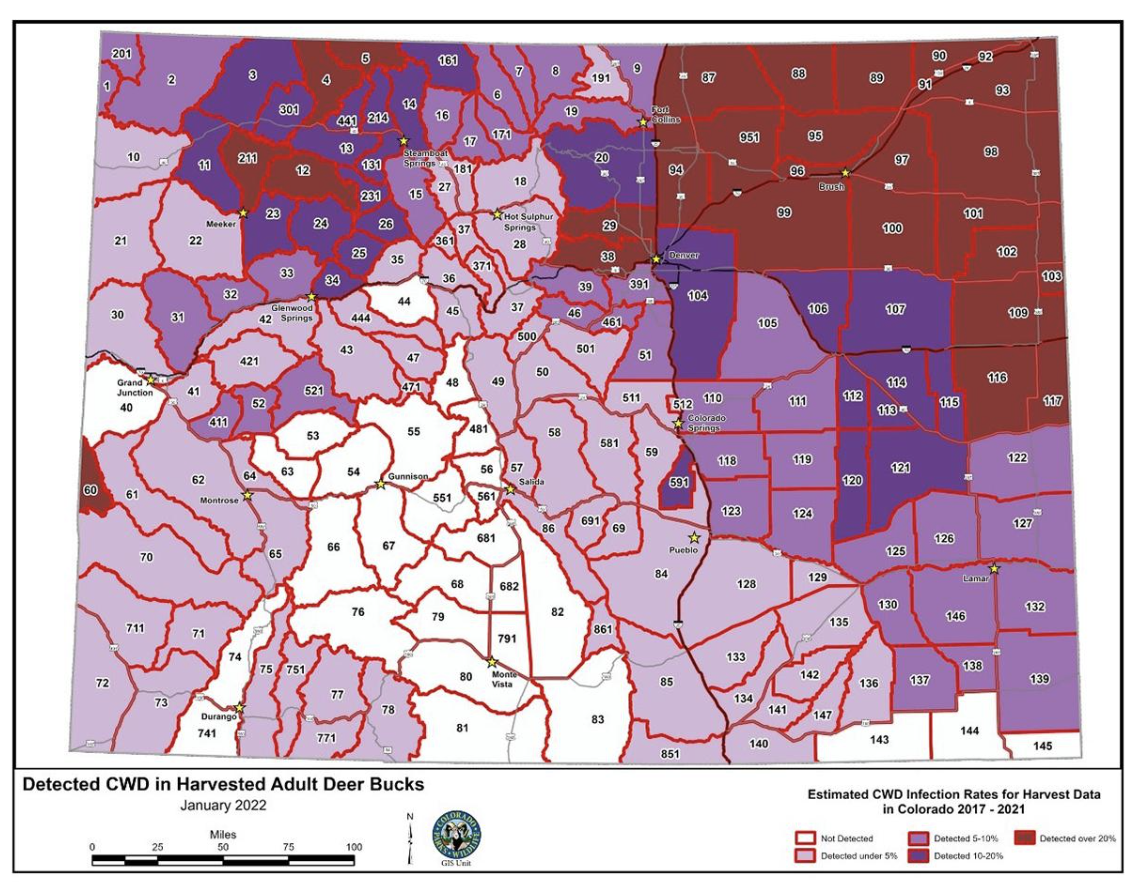 (This CWD deer map, and the elk map below, are also in the 2022 Colorado Big Game brochure.)

At the May CPW Commission meeting in Sterling, CPW Terrestrial Programs Supervisor Matt Eckert provided an update to the Commission on the agency’s CWD mandatory testing efforts. From 2017-2020, CPW focused mandatory testing on deer because deer have the highest disease infection rates and greatest need for disease management. During this time, CPW examined CWD levels across all 54 deer herds. A variety of management methods have been utilized around the state since mandatory testing began. When infection rates are greater than 5%, wildlife managers have utilized tactics such as:

“Overall, the decision to commit to annual mandatory testing has been resoundingly important to understanding the status of this disease in Colorado,” Eckert said. “It’s helped us in acquiring and communicating reliable infection rate estimates and laying a foundation to assess herd-specific management actions to combat CWD.”

According to the 2022 Colorado Big Game brochure, Deer section, page 20, MANDATORY CHRONIC WASTING DISEASE (CWD) TESTING IN SELECT GMUs: In 2022, CPW will require mandatory submission of CWD test samples (heads) from all deer harvested during rifle seasons from specific hunt codes, at no charge. Not all hunt codes in a unit were selected for mandatory CWD testing. Hunt codes selected for mandatory deer testing are (highlighted in green in the brochure).  Speaking for myself, I’ve had my deer tested several times and CPW does a great job of making the process quick and easy.

CPW focused on elk in 2021, which provided the first reliable infection rate estimates for elk since the mid-2000s. 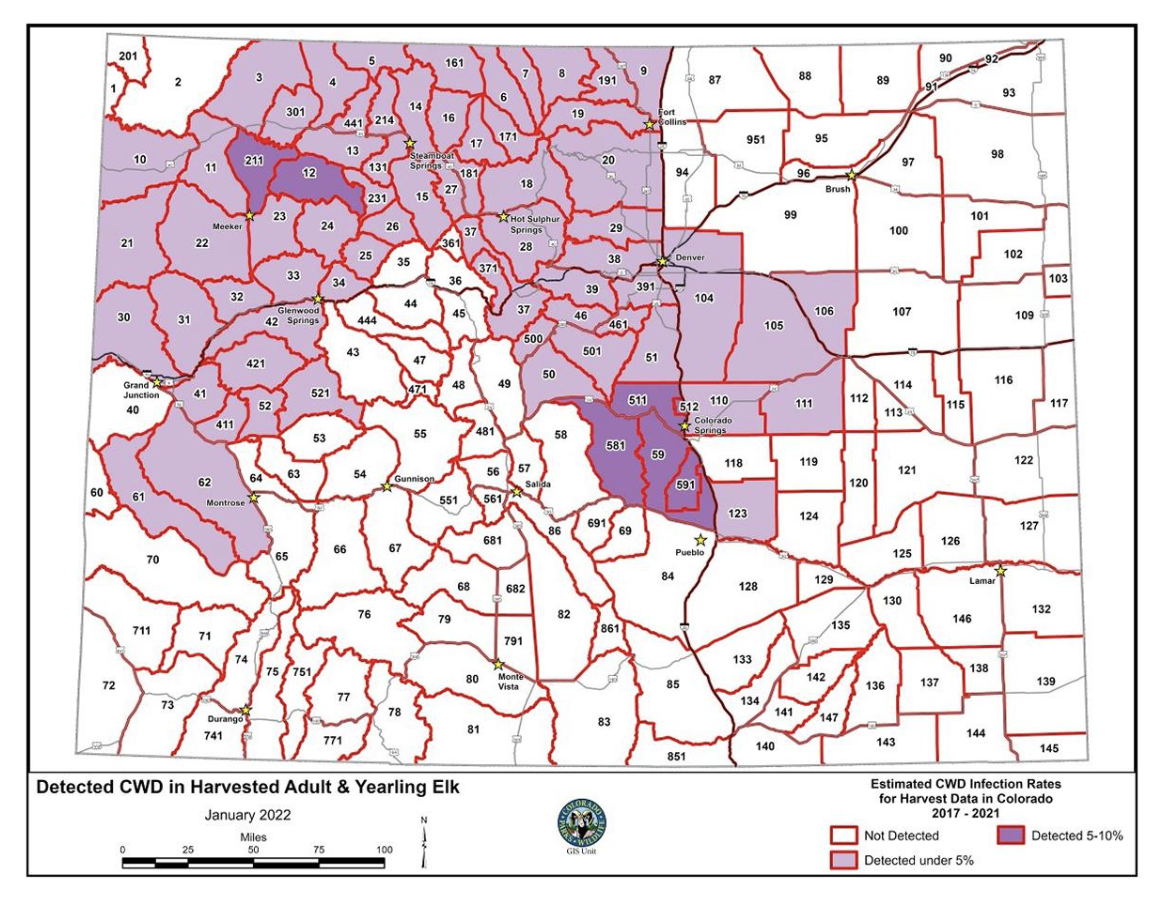 Map of CWD infection rates in harvested adult and yearling elk in Colorado, 2017-2021.

Read the complete CWD update to the Commission here.

What is CPW doing to address CWD?

CPW is working to ensure the long-term health of deer, elk, and moose herds. Over time, this means minimizing the number of animals that get infected and die from this disease. To date, management actions have been prescribed for 27 deer herds designed to reduce infection levels to below the 5% threshold. More information about the plan to manage CWD is available in the Colorado Chronic Wasting Disease Response Plan.

From my perspective, to combat the spread of CWD in our deer population, CPW is attempting to reduce the number of older bucks that are more likely to be carriers. While CPW is doing its best, I can tell you some hunters view these steps negatively because the result can be a significant reduction in mature bucks available to hunt. One management method of doing this (not specifically discussed in this study) is CPW’s current five-year plan which moved hunting season well into November, often during the rut, giving hunters a big advantage. This is designed to put more mature bucks on the ground. Last year was the second year under the five-year plan, but it didn’t quite work out. In many GMUs, like the one I hunted 4th season, the weather was very mild with no snow at all, and the rut had not yet kicked in. So, for the most part, the big bucks stayed hidden and there wasn’t a significant increase in total numbers harvested.  We’ll have to wait and see how it turns out next season.

What are the health risks to humans?

CWD is a prion disease that affects Colorado’s deer, elk, and moose. The disease course generally lasts 2-3 years in deer and is always fatal. Although there has been no evidence that CWD has transmitted to a human, the Center for Disease Control, CPW and the Colorado Department of Public Health & Environment all recommend that hunters not eat the meat of a CWD-infected animal.

According to the 2022 Colorado Big Game brochure, page 13:

IMPORTANT PUBLIC HEALTH MESSAGE Disease in humans resulting from CWD exposure has not been reported to date. However, public health officials cannot determine there is no risk from eating meat from infected animals. Consequently, officials recommend that people avoid exposure to CWD-infected animals. To minimize exposure to CWD and other diseases of potential concern, CPW advises hunters not to shoot, handle or consume any deer, elk or moose that is acting abnormally or appears to be sick. When field-dressing game, wear rubber gloves and minimize the use of a bone saw to cut through the brain or spinal cord (backbone). Minimize contact with brain or spinal cord tissues, eyes, spleen, or lymph nodes. Always wash hands and utensils thoroughly after dressing and processing game meat.