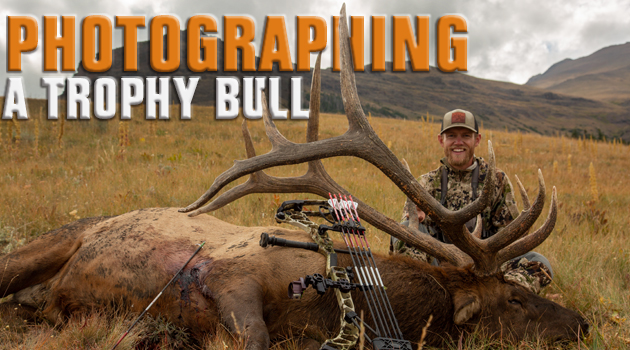 One of the best ways to remember a hunt is with a quality field photo hanging next to your mounted trophy. However, enlarging photos to 8×10 or larger requires a digital camera that is capable of taking high-resolution photos. Most hunters will grab their smartphones or any old digital camera and put it on a low-resolution setting so they can store lots of photos. That’s a big mistake. The first step in being able to take a quality field photo is to purchase a digital camera that has at least a 12 megapixel capability, but be forewarned – not all 8, 10 or even 12 megapixel cameras are the same.

It’s easy to get confused with all the hype about pixels, color temperature and photo quality. I’ll cut through the technical information and get to the basics. You’ll need at least a 12 megapixel digital camera with the ability to set the ISO speed to 100 or 200 on a cloudy or flat light day.

Remember, the most important factor is to use the largest file size or a fine recording photo setting. It sounds great to have a medium resolution setting, which is able to shoot about 100 photos on your chip, but the quality will be sacrificed and depth of color washed out. Plus, you’ll only be able to enlarge it to about a 4×6 size without distorting and having noise in the image. That’s nowhere near the size needed for a magazine spread or even an excellent photo to frame.

One important factor that adds to the quality and sharpness of digital photos is sunlight. I believe light has much more effect on digital cameras than on film cameras. There is a direct relationship between sunlight and sharpness in a digital photo. Using a fill flash all the time will help with defining the subject. The best digital photos are always taken in full sunlight.

There are several quality cameras on the market today. My personal preference is Canon, Nikon or Olympus. These three manufacturers ranked in the top spots in all of the reports. Saying that, in the backcountry I personally use a Canon Powershot G15. It has a 12 megapixel camera and shoots RAW or JPEG formats along with 1080p HD video. It will fit in a large pocket and weights 11 ounces. It retails for around $500 and is an excellent, all-around camera for a wide variety of field photos, including your backcountry hunting trips.

Over the years, I have looked at tripods that are on the market and most are too heavy or bulky, or both. In fact, in my book, Hunting High Mountain Mule Deer I even went so far as to build my own lightweight support that can be attached to a tree. 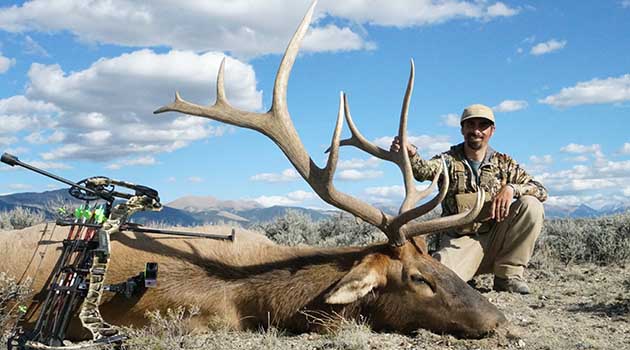 Nowadays, I have found, and have been using for several years now, a tripod that is functional on backcountry hunts. It comes in several sizes and models, but the one that I landed on has a small ball head so you can move your spotting scope or camera left and right or up and down with ease. It’s the Gorillapod SLR Zoom Flexible Mini Tripod with the compact ball head. It has a bubble level on the quick-release adapter, which will aid in leveling the tripod. The best news is that it weighs only 18 ounces! This combination can support up to 6.5 pounds, which tells me even the heavier styles of spotting scopes and cameras can be supported on this lightweight tripod, which, by the way, I’m not tough enough to pack on extended backcountry hunts.

This tripod stands only 12.5 inches long when folded up, making it the perfect size for the backcountry hunter. With its “crazy legs” it can be set up on uneven terrain with ease. Now, here is the best part for me – I can twist its segmented legs around a tree branch or other odd shaped object. This increases your support options where few may exist. The price with the head is only $54.95 from B&H.

Hunters ask me all the time what it takes to get their stories published in Eastmans’ hunting journals. The first thing we look at is the quality of the harvest photos. Scenery, clarity and presenting the trophy in a respectable pose are all taken into account. For example, those photos showing the hunter “riding” his harvested trophy put it in a bad light.

Setting up a bull elk and hunter pose for photos is one of the hardest to pull off. I believe there are two reasons why. First, the sheer size of the animal makes him hard to move into a laying position. To complicate matters, if the bull is on a side-hill or lying in a steep chute, you hardly have any way of setting him up for a quality harvest photo. Your only option at this point is to manhandle him down to a semi-flat spot for photos. Second, and probably most crucial, is it is too common to see the hunter positioned so the horizontal main beams and vertical tines have blocked the view of the hunter in the photo.

Here’s a secret to setting up a quality trophy photo: it’s all in where the viewer’s eyes go first. Keep this in mind when you’re looking through the viewfinder or at the digital display.

Now let’s talk about what setup would not only highlight the trophy bull, but also put you, the hunter in a pleasing position. Before setting up the body position of the bull you need to evaluate the sun’s position in the sky. This is the one element of taking a great harvest photo that the best setup can lack. If you don’t consider the sun you’ll end up with washed out, shadowy or flat looking photos. Remember – always have the light to the cameraman’s back and shinning on the subject. You can get away with having cross-lighting but you will get some shadows and then you’ll need to use the flash. The quality of light in the photo will set the mood of the picture. It will also contribute to the clarity and detail of the finished photo.

The background is also very important. Remember, the purpose of the background isn’t to camouflage the hunter or his trophy, rather use it to accent the animal and hunter. Trees or bushes will fight with the subject and aren’t conducive to an excellent harvest photo. Try shooting at a high f-stop like f2.8 or f4, which will blur the background and make the subject pop out in the photo.

The best light for photos is the morning sun. The second best is just before sunset. Why, you ask? Well, the sun’s rays are the most horizontal and will shine straighter onto the subject during these times of the day. This will make the detail sharper. I will usually do a setup early in the morning to get the warm sunlight on the photo, then wait a few minutes and shoot with the full, bright, intense sun. Out of the three parts making up a quality photo, light is the most important. Without good sun, a great setup just becomes a dull photo.

What if you have to shoot midday with sunrays coming straight down on the subject? In this instance, always use the flash to fill in the shadows. The fill flash will turn a dull, shadow-prone photo into a respectable shot. Plus, using a polarized filter will take out the haze that is so prevalent at midday. It will put the blue back into the sky, which I hope you have plenty of in the upper third of the photo. 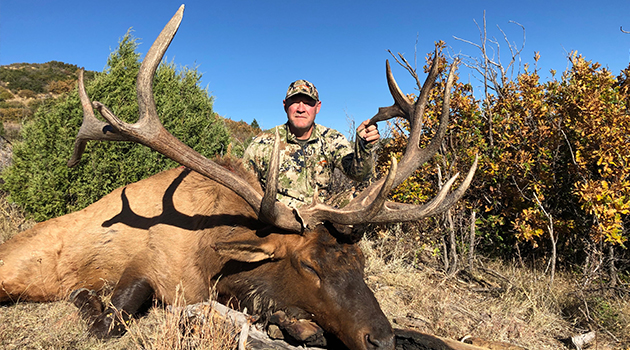 The background needs to be the sky or something that will not compete with the subject and its antlers or horns. Having white clouds behind the animal and hunter isn’t all that bad. Anything with a simple and somewhat unobstructed background will keep the horns or antlers from becoming disguised.

When all of this is taken into account you can now evaluate what is most impressive on the bull’s rack. Maybe he has long back tines or a whale-tail main beam. Try to use that as the focal point of the shot. Move the beams around until that impressive attribute of the antler is well displayed in the photo. On rare occasions, the bull’s rack will have several outstanding features, so maybe two totally different setups are photographed. Later, choose the best for display on the wall.

The next important task is to clean off any blood from the face and body that’s exposed to the lens. A bloody face or body can ruin an excellent trophy setup. I take water and wash off the blood. If you don’t have water, grass will take most of it off. Sometimes, I will cover the wound up with sagebrush or a bush. It makes for a more pleasing photo. I also make sure that the tongue isn’t hanging out.

Little details like this will add up to a great trophy photo. Remember, it doesn’t take any longer to arrange a great photo setup than a bad one. My advice is to look through this book, as well as back issues of Eastmans’ Hunting Journal and Eastmans’ Bowhunting Journal and study some of the better photo setups and cover shots. Make a mental note about the hunters’ positions and the arrangement of the trophies. Then, the next time you’re photographing your trophy, you’ll have a solid idea of what makes a great setup.